The Science of Human Hair – The Amazing Facts

The scalp is one of the complex organs on the human body with at least five layers beginning with the outermost skin, the connective tissue, the aponeurosis layer, the loose areolar connective tissue, and the pericranium; a vital layer for regeneration purposes.

In reality, hair is simply perceived to be a mere characteristic of the human body, but it has a complex anatomy and a vital purpose for gender identification.

The Science of Hair Development

During pregnancy, the fetus begins to grow hair follicles and by the end of the second trimester, all the hair follicles are formed that total up to 5 million on the body.  At least 1 million follicles exist on the head and 100,000 follicles located on the scalp. As the baby grows, hair will fill the entire scalp and also increase its length.

During every 23 to 72 hours, the cells of the bulb divide at a rate, perceived to be faster than for any other cell in the body. Another feature of human hair is the sheath. There are generally two types of sheaths “the inner and outer sheath” and these surround the hair follicle, protecting and forming the visible “growing” hair shaft.

The inner sheath follows the hair shaft to the opening of the sebaceous gland and sometimes to the apocrine (scent) gland, whereas the outer sheath extends only to the first gland. An erector pili muscle attaches below the gland to the fibrous layer and when it contracts, it causes the hair to raise and also stimulates the sebaceous gland to secrete oil which conditions the hair.

The hair shaft, on the other hand, is made of a hard protein, known as Keratin with three layers. These are the medulla, the cortex (makes a large part of the hair shaft), and the cuticle (with shingle-like overlapping scales).

At least every single hair follicle on the scalp is believed to be in either of the three phases/stages.

During the Anagen phase, the hair cells in the root divide rapidly and this is the active phase of the cycle. In this phase, new hair is formed and pushes the club hair up and later goes out. This phase lasts for 2 to 6 years and your hair grows about 1cm every 28 days. 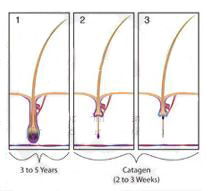 It is the transitional stage at least 3% of your hair is in this phase and it lasts for about two to three weeks.

Hair papilla becomes condense ball of spindle shape nuclei, papilla lies just below a nipple of epithelium called secondary hair germ. Just above the secondary hair germ, the telogen club expands and cornified, this progressive cornification occurs about in three month period. Near the end of telogen phase, the permanent part of the hair along cornified club base falls off. After completion of telogen phase, the growing anagen phase resumes

At least 25 to 100 telogen hairs are shed each day, but due to hormonal imbalances and other factors, one may witness more shedding, which reduces the volume, density, and amount of hair, at times leading to baldness.

Ask us for a callback