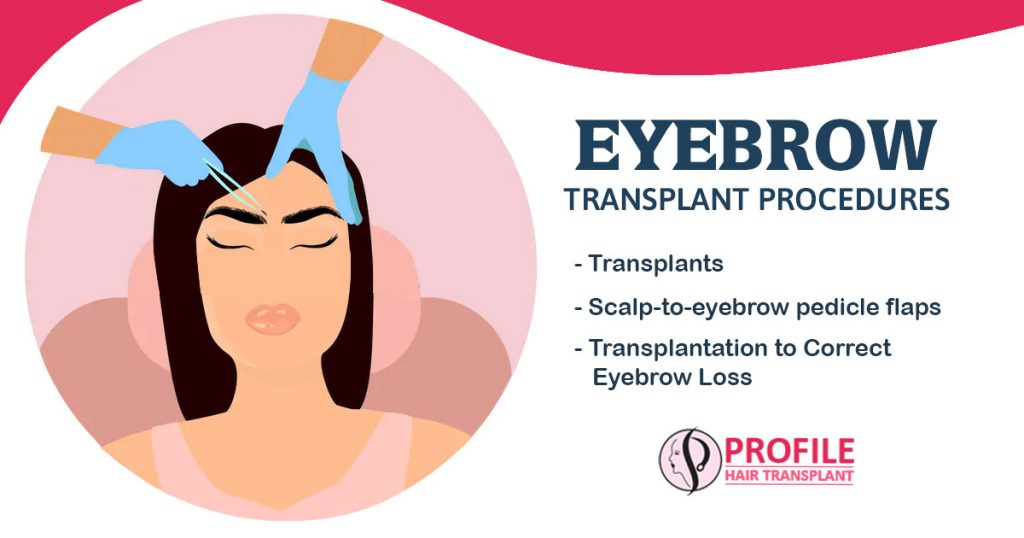 The cause of eyebrow/eyelash loss is evaluated in medical history and examination prior to consideration of hair restoration:

Trauma, burns or surgery may have resulted in formation of scar tissue; reconstructive surgery may be necessary before eyebrow/eyelash restoration. The degree of eyebrow loss may vary from complete to partial; the degree of loss may be a consideration in selection of the restoration procedure.

A number of procedures are available for restoration of all or part of the eyebrow: Transplantation of micrografts or single hairs from a donor area to the eyebrow, and A reconstructive flap or graft procedure that brings a strip of hair from another site to the eyebrow. The patient and surgeon must agree on the procedure best suited to the needs of the patient. Eyebrow and eyelash restoration procedures are usually performed in an outpatient setting. Postoperative complications are usually limited to minor pain and swelling.

Reconstruction of the Eyebrow Using Flaps or Grafts

Transplants A strip of hair-bearing skin and subcutaneous tissue is removed from a donor area on the scalp and grafted into the surgically-prepared eyebrow site. The transplant procedure is performed by selecting a hair-bearing area of the scalp with hair that is of appropriate texture and orientation to serve as eyebrow hair. Micrografts of one to two hairs placed into incisions should be used for eyebrow reconstruction.

Scalp-to-eyebrow pedicle flaps (Less commonly used) A strip of hair-bearing skin and subcutaneous tissue is raised from the temple area just in front of the ear, with its blood supply (a branch of the superficial temporal artery and vein) attached. This type of donor graft attached to a blood supply is called a pedicle flap. After the pedicle flap is raised, the recipient area (the eyebrow) is prepared to receive the flap. A subcutaneous “tunnel” is created from the base of the pedicle flap to the eyebrow recipient site; the flap is pulled through the tunnel and secured to the recipient site with stitches. The pedical flap’s blood supply nourishes the grafted tissue until the grafted tissue develops its own blood supply from surrounding tissue. Hairs grown from grafts and pedicles may have to be “trained” with gel or wax to lay flat to the skin like eyebrow hair; grafted hair also may have to be trimmed occasionally.

Transplantation to Correct Eyebrow Loss A purpose of transplantation of hair to the eyebrow is to recreate the eyebrow in a natural contour. Patient and physician must work together to outline the eyebrow area to conform to the natural symmetry of the patient’s face. Depending on the size of the area to be transplanted, more than one transplant session may be required; two or more sessions several months apart are common.

Donor hair for the transplant is taken from a site that furnishes finer rather than coarser hair; finer hair is a better “match” for eyebrow hair. Donor hair is transplanted as micrografts of one to two hairs. Each graft is placed into an incision prepared for it. The use of single hairs or micrografts permits meticulous adherence to the eyebrow contour for a natural appearance. As the transplanted hairs grow in their new position they may require occasional trimming as well as “training” with gel or wax.

Eyelash/eyebrow hair transplant surgery in Ludhiana, Punjab is the only procedure used to restore eyelash hair. This is a very specialized procedure that is performed by just a few surgeons. As is the case for eyebrows, donor hair for transplantation must be finer rather than coarser. All grafts are single hairs meticulously placed into the lid. As few as six hairs per lid may be adequate to create a natural effect.

Itching is a common and troublesome postoperative complication. If the patient gives in to temptation and scratches, there is the risk of dislodging the hair grafts and initiating infection. Eyeglasses may be worn to deter scratching. The dermatologist can prescribe medications to relieve itching.

Training of transplanted hairs into eyelash conformation is accomplished by use of lash oil and an eyelash curler.

Ask us for a callback